Gary King asked the question “What If the Obama Campaign Didn’t Win Him the Election?” and makes the fair point that Obama’s battleground state vote percentage does not look very different than the other states.

On Friday at the Google Political Innovation Summit, a contingent took the side that because we can’t see the effect of campaigns in analyses like King’s, campaign efforts are generally worthless. I want to make the simple point that Obama’s and Romney’s persuasion efforts can cancel each other out, thus making the effects of campaigns hard to see. Examining turnout, rather than support, shows the impact of campaigns, as both Obama and Romney are attempting to turnout their supporters. [1] Below I replicate King’s exact graph, but with turnout (VEP) as the variable of interest. 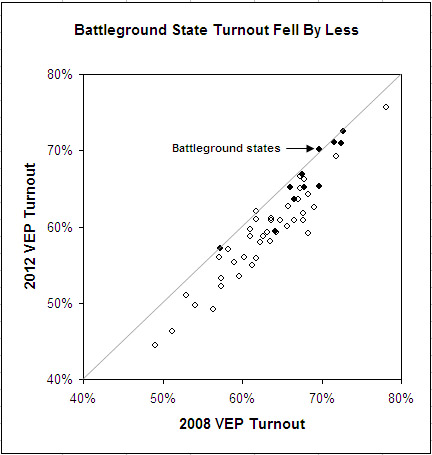 [1] The sustained Voter ID effort by the GOP hurts this hypothesis as these tactics had the potential, if the courts hadn’t struck them down, to cancel out some of Obama’s GOTV efforts. I would note that turnout in Kansas, the only state with a new Voter ID law upheld by the courts, dropped 5.4 percentage points — a good deal higher than the non-battleground state average.