I learned of 2048 from this xkcd cartoon. I played a few times, and then on Thursday it struck me that the game is similar to the Towers of Hanoi problem. That night I spent way too many hours crafting the outlines of a winning strategy, proving to myself that I could beat the game. The basic idea is to align the tiles in a snakelike pattern from highest to lowest (from the upper-left, down, then over one, then up, etc) as shown below: 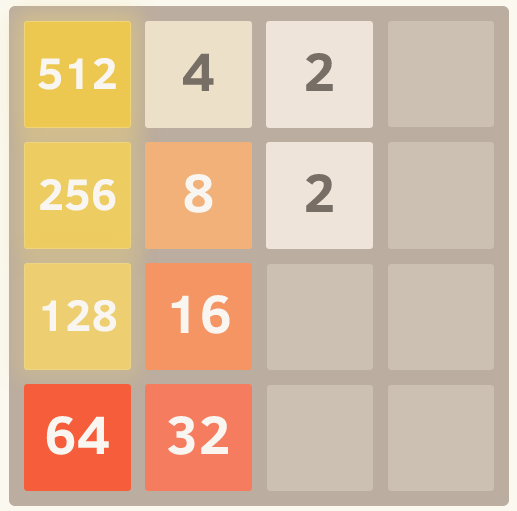 It’s especially crucial to keep your highest-numbered tile in a corner (e.g., the upper-left).

The computer scientist in me wasn’t satisfied with solving the puzzle by hand. Rather, I felt the need to develop an algorithm, thus allowing a computer to win the game for me. Overall, I did an adequate job — the computer wins the game, but I notice that it still makes small mistakes. You can check it out here. (On my personal machine, each move takes about a second, which provides a pleasant viewing experience — hopefully the same is true for you.)

Some notes on the algorithm: