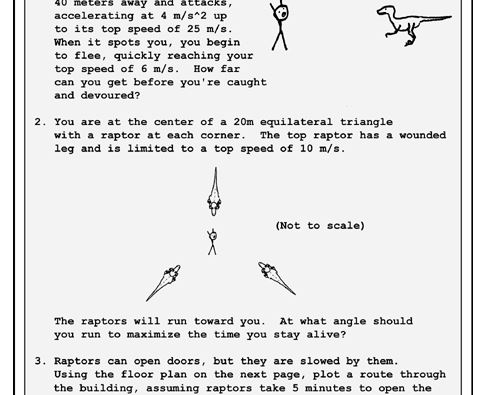 Jackie and I succeeded in crafting a second annual puzzle hunt. Hopefully this is the start of a tradition. If you weren’t there in person, try them out yourself.

Jackie and I just finished participating in the MIT Mystery Hunt, and had a blast as always. The title was “20,000 Puzzles under the Sea” (plus or minus 20,000 puzzles), complete with a steampunk theme. Puzzles will likely be available to all in a couple days.

One of the puzzles was Ariel’s Scavenger Hunt, where we had to find items for Ariel from the Little Mermaid. Bonus points if the items worked under water and if they were steam punk themed. So, for the category of “wooing the prince” — and given Ariel’s penchant for underwater singing — we teamed up with fellow PuzzFeeder Kim to deliver the following song to Ariel.

Under the Steam
The gadgets are always shiny
On somebody else’s sub
You dream about going down there
But whether to – there’s the rub
Just look at the world around me
Get rid of your rusty junk
Our tech is the classic style
So join me and turn steam punk!

In this Victorian paradise
Love, nuts and bolts — they fit so nice
We’ll be romancing
Kissing and dancing
Turn up the steam.

It’s time for the MIT Mystery Hunt, a tradition I participated in as an undergrad and have started to revisit recently. My new wife and I head up to the hunt tomorrow, but if you can’t participate, here are the puzzles from our wedding mystery hunt last September. The answers to the puzzles directed folks around the Tidal Basin. Have fun with these!

I’ve been tapped as the new executive director of the Analyst Institute. I’ve worked with AI’s fantastic team before, and I could not be more excited to continue and expand the culture of experimentation that has developed on the Democratic/progressive side.

END_OF_DOCUMENT_TOKEN_TO_BE_REPLACED

What’s on Your DC Primary Ballot?

The Monkey Cage Blog was kind enough to run my guest post about the impact of 2012 GOTV efforts [1]. I relied on observational data from Catalist to conduct my analysis (many thanks there) because randomized experiments (which are deservedly the “gold standard”) are unavailable for such a broad investigation. Even with Catalist’s “incredible data”—which is at the individual-level data—the observational analysis is extremely tricky. This wonky, methodological blog post explains why. (Thanks to Mark Mellman—former boss; mentor of mine—and Josh Rosmarin for prompting this train of thought, and to Kevin Collins for helping refine it.)

They key to estimating 2012 GOTV effects is isolating the impact of 2012 campaign activity. Crucially, this means (a) eliminating non-campaign competitiveness effects while (b) not wiping away campaign activity from the data. [2]

To alleviate this problem, I control for individual-level a priori turnout score—i.e., the probability (at the beginning of the campaign season) that political practitioners assigned to each voter for the likelihood that she would cast a ballot. The reason this control is so important is that since competitiveness affected the battleground states in 2008, 2004, etc, then partisans are naturally more likely to vote in presidential years. Crucially, this increased probability is reflected in their turnout scores. By controlling for this score, I (attempt to) isolate 2012 campaign effects.

I’ll be honest that there are a multitude of small problems that make this 2008-based turnout score an imperfect control. State competitiveness could have changed from 2008 to 2012 (though it barely did). Voters could have become more (or less) partisan in the intervening four years, thus altering their individual competitiveness effects. Some voters moved from a non-battleground state to a battleground state, and their turnout score might not reflect the effect of this move.

However, those cavils pale in contrast to the issue if controlling for 2008 (via a turnout score) masks 2012 competitiveness effects, shouldn’t this control also mask 2012 campaign effects? After all, Obama and McCain ran full-fledged campaigns in 2008—those effects should be baked into the 2012 turnout score just as I hope the competitiveness effects are. And, if I excuse this issue by claiming (a) 2008 turnout is diluted within the holistic turnout score, (b) some people’s scores will have shifted between elections (thus entering or exiting campaigns’ target universes) and (c) some people have moved between states, then don’t those same excuses mean I similarly failed to fully account for the competitiveness effect?

The good news is that the data do not support this final worry. If the competitiveness effect incidentally dominated my analysis, then the partisan effect would be most observed at the extremes of the scale (as the sporadic voters who are the biggest partisans would be the ones to care most about living a battleground state). However, this pattern is not observed. Thus, I feel fairly confident that I eliminate competitiveness concerns through the turnout score control.

However, my hunch is that by controlling for 2008 turnout (via the turnout score), I do in fact mask some of the 2012 campaign effects, thus biasing my estimates downward. As a cautious person, I’ll take that risk rather than potentially inflating the numbers upward and seeing an effect where there is none. Others may make a different decision.

All of the above demonstrates why conducting a randomized controlled experiment, in which none of these confounding elements are an issue, is the key to estimating causality. It’s why I’m so glad that a culture of experiments on the Democratic/progressive side–and many props to Malchow, Podhorzer, and everyone at AG/AI for making it happen.

END_OF_DOCUMENT_TOKEN_TO_BE_REPLACED

The Importance of Same-Day Registration

Yesterday, I registered a wonky disagreement with the presidential voting commission’s report. Today, I raise a more straightforward cavil. Kevin Collins and StephanieWDC kick things off:

@kwcollins but same-day registration is!

Same-day registration (aka, Election Day registration, or EDR) allows people to register (or fix their existing registration) at the polls on Election Day. The beauty of this system is that if a citizen who is generally uninterested in politics is persuaded to vote on Election Day (perhaps because of the media attention, peer pressure, or the prevalence of “I Voted” stickers) then that person doesn’t have to worry about the fact that they didn’t do any pre-planning with respect to their registration. Their vote will count. Thus, EDR boosts turnout by 3 to 7 percentage points.

Perhaps the commission didn’t endorse EDR because more people showing up on Election Day who need help with registration slows the process down. But if local election officials use resource calculators, we can solve that problem while boosting turnout and improving our democracy.